The number of active fleet management systems deployed in commercial vehicle fleets in Australia and New Zealand was almost 0.9 million in Q4-2018 according to a new research report from the leading IoT analyst firm Berg Insight.

Growing at a compound annual growth rate (CAGR) of 15.0 percent, this number is expected to reach nearly 1.8 million by 2023. A wide variety of players serve the fleet telematics market in Australia and New Zealand, ranging from small local vendors to leading international solution providers. The top-15 players in Australia and New Zealand account for 70 percent of the active units on the market, and more than 40 percent is represented by the top-5.

He adds that the company now has surpassed the milestone of 100,000 units in Australia alone, holding a strong position also in New Zealand. 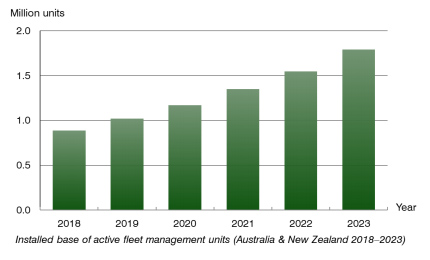 The fifth largest player is Netstar Australia which originates from the consolidation of Pinpoint Communications and Fleet Logistics (Ezy2c). Other providers with comparably sizeable subscriber bases in the region include the local solution providers Smartrak and IntelliTrac as well as international players including MiX Telematics and Fleet Complete. Additional top-15 players in Australia and New Zealand are Coretex, Digital Matter, GPSengine, Bridgestone’s Webfleet Solutions, Simply Unified and Procon Telematics.

Players just outside of the top-list moreover include Ctrack (Inseego), GPS Innovations (GPSi Group) and Directed Electronics Australia. The latter works with a range of commercial vehicle OEMs on the local market.