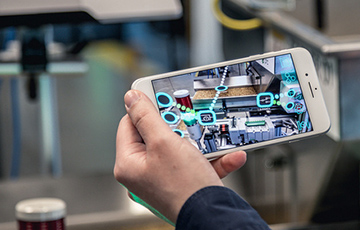 With this groundbreaking new spatial computing platform, teams can improve the operation of complex manufacturing environments and make IoT-enabled machines easier and more intuitive to control with on-the-fly programming. Robots can be operated and controlled through more intuitive user interfaces (UIs), and intuitive Human Machine Interfaces (HMIs) can be quickly built, enabling improved human-machine interaction and merging the digital world and physical screens.

“Many developers, innovators, and researchers recognize that AR can help democratize the programming and control of connected machines.”

“What they need are solutions that help alleviate development overhead for prototyping these innovative, next-gen AR tools. PTC is helping them develop tools and interfaces to spatially interact with and program the world of interconnected things around them.”

As the newest addition to the Vuforia AR product portfolio, Vuforia Spatial Toolbox is designed to complement the current commercial Vuforia offering. The Vuforia Spatial Toolbox is a system consisting of two components which combine to provide an industrial AR/Spatial Computing prototyping environment with pre-built UI/UX elements, spatial programming services, an intuitive UI app, and simplified connectivity to IoT with the Vuforia Spatial Edge Server. The open-source environment is designed to drive further exploration around the convergence of the physical and digital worlds and help to push the boundaries of innovation.

To enable users to take advantage of the new Vuforia Spatial Toolbox while working from home during this crisis, PTC created a basic hardware interface add-on that allows them to connect the Vuforia Edge Server with Arduino projects, children’s LEGO® BOOST and LEGO® Education WeDo 2.0 sets, and the Philips Hue smart lighting system.

The technology is the brainchild of Valentin Heun, Ph.D., vice president, Innovation Engineering, PTC, and former scientist at the MIT Media Lab’s Fluid Interfaces Group, where he led the Reality Editor™ human-machine interface research. Dr. Heun is a leader in the AR industry, and an active author and speaker on topics related to AR.