The integration of cameras to enable various video-based solutions in commercial vehicle environments is one of the most important trends in the fleet telematics sector.

Berg Insight’s definition of video telematics includes a broad range of camera-based solutions deployed in commercial vehicle fleets either as standalone applications or as part of conventional fleet telematics. Berg Insight has found that the installed base of active video telematics systems in North America reached almost 1.6 million units in 2019.

He adds that Streamax is the leading hardware provider and the company also offers software dashboards. 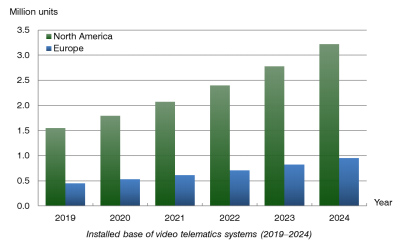 Among the general fleet telematics players, Samsara stands out as an important solution provider with a sizable number of camera units deployed across its subscriber base. Additional major players in this space include the video safety specialist SmartDrive Systems, the fleet management player KeepTruckin and the video telematics company SmartWitness. The remaining top-10 providers are Nauto, Trimble, SureCam and VisionTrack.

“Other noteworthy video telematics players include Netradyne, Seeing Machines, CameraMatics and LightMetrics which have all reached installed bases in the tens of thousands”, concluded Mr. Andersson.