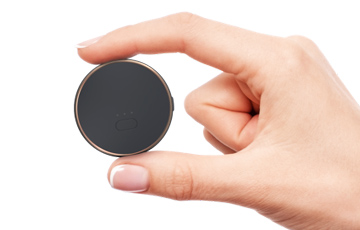 Lightweight, versatile, seamless and affordable, the new Curve tracker, designed by Vodafone, helps you locate the things you value most.

Vodafone UK has expanded its consumer Internet of Things (IoT) range with a tracker designed and manufactured by the company itself.

The new multi-purpose tracker – called Curve – is able to locate your valuables such as keys, laptops, bags and cars.

Until now, Vodafone had expanded its suite of IoT products using trusted manufacturers from around the globe. This change of strategy means that new smart tech will instead be developed in-house with some of the world’s leading designers.

“The launch of Curve highlights the focus the team has on creating pioneering smart tech and digital experiences with seamless user experience at the core. Our research showed how vital it was to create a product that was as intuitive as it was versatile – allowing users to keep track of belongings and stay connected to what matters most.”

According to Business Insider, by 2026, there will be a predicted 64 billion smart devices globally. The launch of Curve shows the continued development that Vodafone has put into the rapidly evolving sector.

Vodafone’s latest IoT product, from the ‘Designed & Connected by Vodafone’ range, has a distinctive new design identity across hardware, software and communications.

The new IoT tracker is lightweight, yet has up to seven days’ battery life and a built-in SIM providing connectivity when you’re on the move. Unlike Bluetooth-only trackers, Curve uses four different tracking technologies – GPS, Wi-Fi, Cellular and Bluetooth – to provide a more reliable connection for customers who need to locate their items.

“Through driving the development of our own smart tech, we are helping bring customers added peace of mind. Created with leading industrial designers and connected by our global network, Curve’s versatility makes it the perfect way to keep track of what matters most, fitting seamlessly into everyday life.”

The launch of Curve is the first in a series of new smart tech products that will be unveiled by Vodafone in the next few months.