Aeris and KORE Wireless have consolidated their positions as leading players in North America, with 14 million and 13 million cellular IoT subscribers respectively at the end of 2019. Sierra Wireless has established a trans-Atlantic subscriber base with 3.6 million IoT connections in both Europe and North America. In Europe, Wireless Logic is the largest IoT managed service provider with about 3.5 million subscribers. The company is systematically expanding its regional presence through a combination of strategic acquisitions and organic growth. 1NCE has grown rapidly to become the runner up in Europe since its launch in 2018, providing cellular IoT connectivity to about 3 million devices at the end of 2019. Additional IoT managed service providers are Cubic Telecom, BICS, Arm, Transatel and Eseye having between 2–3 million cellular IoT subscribers each.

Several IoT managed service providers are leading the commercialisation of advanced SIM solutions, based on eUICCs and multi-IMSI SIMs or a combination of the two.

“These solutions offer an alternative to the roaming model, enabling devices to automatically connect to a local cellular network.” 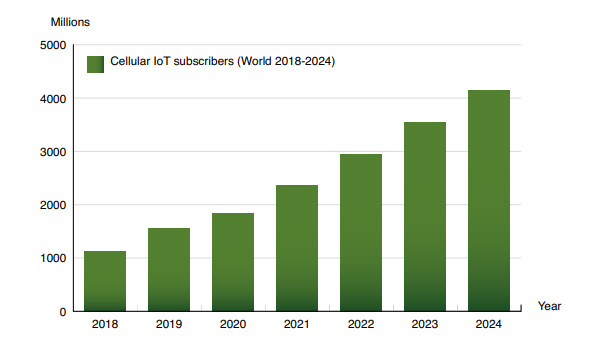