According to new a research report from the IoT analyst firm Berg Insight, the installed base of water utility AMI endpoints in Europe and North America amounted to 46.1 million units in 2019.

The installed base is forecasted to grow at a compound annual growth rate (CAGR) of 15.0 percent to reach 106.8 million units in 2025. The total number of communicating utility water meters – including both AMI and AMR – will at the same time grow from 132.4 million units in 2019 to 204.6 million units in 2025. AMR includes metering points that require readings through drive-by or walk-by operations while AMI involves a fixed network communications infrastructure and supports true IoT connectivity.

North America today constitutes the leading market for both AMR and AMI solutions and accounted for more than 70 percent of all installed AMI endpoints in Europe and North America in 2019.

“The trend is most prominent for LoRaWAN in Europe and LTE-M in North America, while NB-IoT is still largely confined to smaller projects across Europe – particularly in Spain, Italy and Eastern Europe.”

Veolia’s recent commitment to roll out 3 million LoRaWAN-connected water meters across France by 2029 is one of the early examples of large-scale adoption of LoRaWAN within water AMI in Europe. 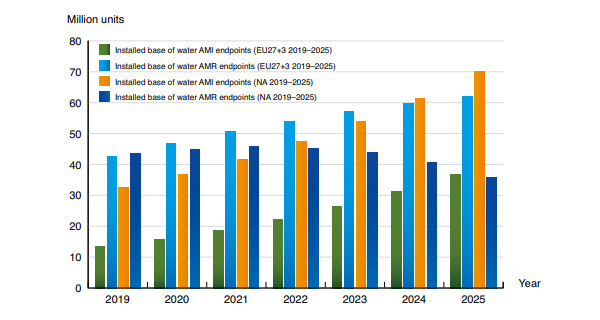 Overall, Berg Insight forecasts that AMI endpoint shipments in the European and North American water sectors will grow from a total of 6.2 million units in 2019 to 14.2 million units in 2025. While most endpoints will be deployed in smaller projects, growth in the next few years will to a large extent also be driven by massive rollouts by cities such as Philadelphia, Louisville, Austin, Fort Worth and Columbia in North America and by utilities such as SUEZ, Veolia, Thames Water and Anglian Water in Europe.

“While markets such as France and Spain have historically been the primary markets for water AMI solutions in Europe, a large share of deployments in the next few years are expected to take place in Italy, the UK and Benelux”, concluded Mr. Ostling.