The number of fleet management systems deployed in vehicle fleets in India was around 3.5 million units at the end of 2020 according to a new research report from the leading IoT analyst firm Berg Insight.

The fleet telematics industry in India is in many respects still nascent and major parts of the addressable market remain largely untapped. The uptake of fleet management solutions is however growing and the market is to some extent favoured by government regulations such as AIS 140. Growing at a compound annual growth rate (CAGR) of 14.0 percent, the total installed base of fleet management systems in India is expected to reach almost 6.8 million units by 2025.

The Indian fleet telematics market is served by many companies including a myriad of small local vendors, a number of pan-Indian players and a few international telematics giants. “Berg Insight ranks WheelsEye, LocoNav, Uffizio and Letstrack as the largest solution vendors in India”, said Rickard Andersson, Principal Analyst, Berg Insight.

He adds that these four companies all have total installed bases of over 0..5 million units on their respective platforms across all applications and geographies, though the shares represented by fleet management solutions on the Indian market vary substantially. “Tata Motors and Ashok Leyland are the leading players in the OEM segment”, continued Mr. Andersson. The former has collaborated with UK-based Microlise for many years, but the company has now launched a next-generation connected vehicle solution developed in house. Ashok Leyland has reached more than 150,000 vehicles on its connected vehicle platform, working with Trimble which provides the hardware. Trimble is also a leading high-end fleet management solution provider in the aftermarket segment in India. 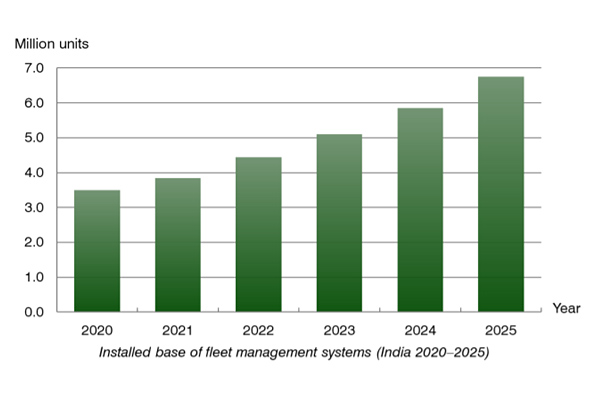 The remaining top-10 players on the Indian market which have all reached the milestone of 100,000 units are Autoplant, Axestrack, Volty and Fleetx. Notable providers just outside of the top list include Arya Omnitalk, TrackoBit, Millitrack and Transight. The market is also served by many others such as Matchpoint GPS, Bosch, OneQlik, MapmyIndia, BlackBuck, Protrack GPS, Intellicar, Gurtam, Rane t4u, iTriangle, Nippon, IntelliPlanner, EcoCosmo, CarIQ, Intangles, Asset Telematics and Mireo. “These companies all have installed bases in the tens of thousands in India”, concluded Mr. Andersson.