The number of active fleet management systems deployed in commercial vehicle fleets in Europe was 11.5 million at the end of 2020, according to a new research report from the IoT analyst firm Berg Insight.

The top-30 vendors have today more than 100,000 active units in Europe. Webfleet Solutions’ subscriber base has grown both organically and by acquisitions during the past years and the company is the clear market leader on the European market and reached an installed base of about 726,000 units at year-end 2020.

Berg Insight ranks Verizon Connect as the second largest player in terms of active installed base with around 434,000 units. Targa Telematics is in third place and had achieved an installed base of an estimated 415,000 units. ABAX and Scania follow and have reached 340,000 units and 316,000 units respectively. Calamp, Bornemann, AddSecure Smart Transport, Masternaut and Gurtam are also ranked among the ten largest providers with 210,000–300,000 units each.

The consolidation trend on this market continued in 2021.

“Eight mergers and acquisitions have taken place so far this year among the vendors of fleet management systems in Europe.” 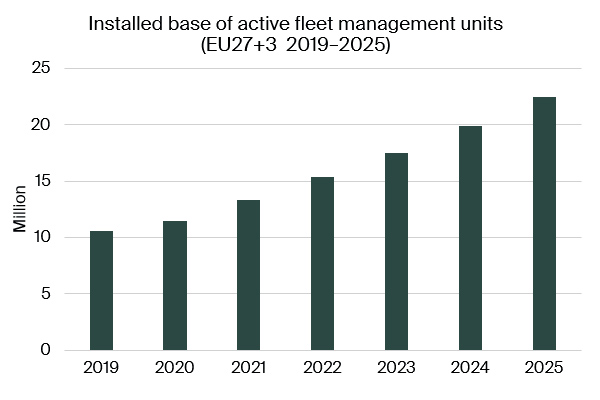 YellowFox announced in January that ECM Equity Capital Management had acquired a majority share of the company. Eurowag Telematics acquired in the same month a 51 percent stake in KomTeS, its value-added reseller in the Czech Republic.

In February, BigChange was acquired by Great Hill Partners investing £ 75 million. BigChange’s management team will retain a significant minority stake in the company. In March, Hg acquired a controlling stake in Trackunit from Goldman Sachs and GRO Capital. Radius Payment Solutions acquired CanTrack in April. ORBCOMM was listed on the Nasdaq stock exchange until April when GI Partners acquired the company in an all-cash transaction that values ORBCOMM at approximately US$ 1.1 billion, including net debt. In September, Trackunit merged with the Industrial IoT division of ZTR, a developer of solutions for the compact construction industry. Finally, INELO Group acquired 73.5 percent of the shares in CVS Mobile in the same month. INELO Group is a Polish company controlled by Innova Capital.

Mr. Fagerberg anticipates that the market consolidation of the still overcrowded industry will continue in 2022.