According to the Cisco® Visual Networking Index (VNI) Global Mobile Data Traffic Forecast for 2011 to 2016, worldwide mobile data traffic will increase 18-fold over the next five years, reaching 10.8 exabytes per month — or an annual run rate of 130 exabytes — by 2016.

The expected sharp increase in mobile traffic is due, in part, to a projected surge in the number of mobile Internet – connected devices, which will exceed the number of people on earth (2016 world population estimate of 7.3 billion; source: United Nations). During 2011−2016 Cisco anticipates that global mobile data traffic will outgrow global fixed data traffic by three times.

The forecast predicts an annual run rate of 130 exabytes of mobile data traffic, equivalent to:

An exabyte is a unit of information or computer storage equal to 1 quintillion bytes. 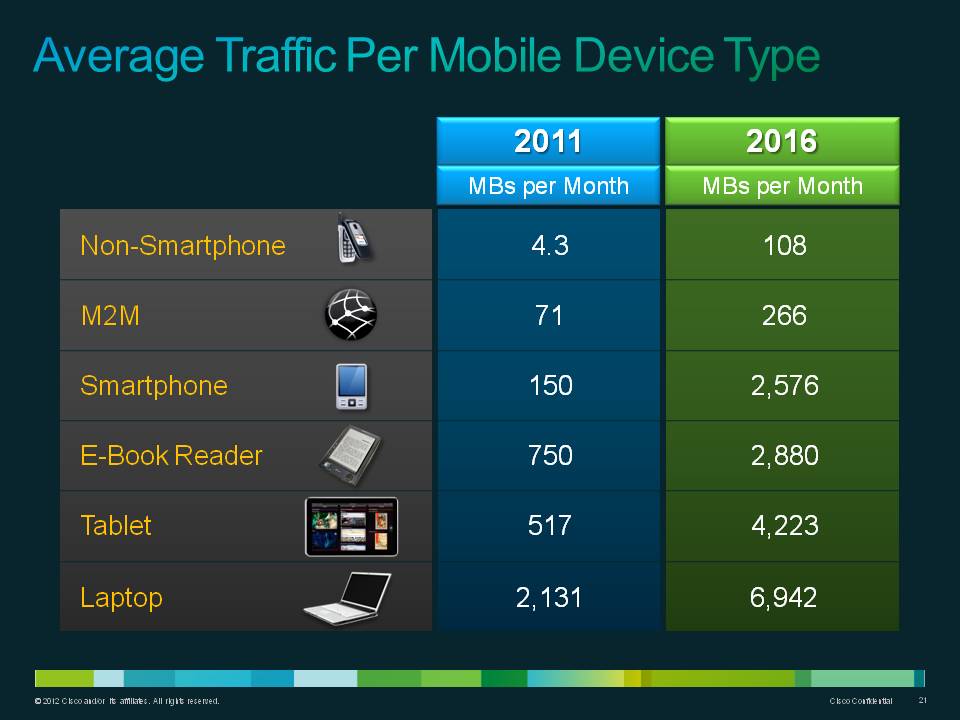 This mobile data traffic increase represents a compound annual growth rate (CAGR) of 78 percent spanning the forecast period. The incremental amount of traffic being added to the mobile Internet between 2015 and 2016 alone is approximately three times the estimated size of the entire mobile Internet in 2012. The following trends are driving these significant increases:

The Cisco study also projects that 71 percent of all smartphones and tablets (1.6 billion) could be capable of connecting to an Internet Protocol version 6 (IPv6) mobile network by 2016. From a broader perspective, 39 percent of all global mobile devices (more than 4 billion), could be IPv6-capable by 2016.