According to a new research report from the analyst firm Berg Insight, the global number of cellular M2M subscribers increased by 23 percent during 2015 to reach 265.2 million at the end of the year.

East Asia was the largest regional market with 90.4 million M2M subscribers, followed by Western Europe and North America with 59.0 million and 52.5 million respectively. Over the next five years, the installed base of cellular M2M devices is projected to grow at a compound annual growth rate (CAGR) of 22.9 percent.

“Our current view is that the 1 billion milestone for cellular M2M subscribers will be reached in 2022.”

As the cellular M2M market continues to grow, it is starting to generate substantial revenues for leading telecom operator groups. Verizon and Vodafone reported quarterly M2M/IoT revenues in the range of € 150–200 million each in the first half of 2015 and could be on track to reach € 1 billion on an annual basis within a few years’ time. Both groups have substantial telematics businesses, originally established through acquisitions. Besides traditional connectivity and professional services, they generate a considerable share of their sales from automotive products, driver assistance services and connected automotive applications. 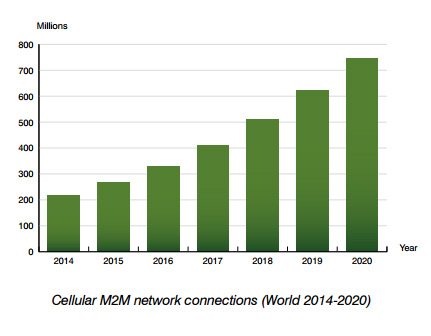 One of the main trends highlighted by the report is the rapid transformation of the wireless M2M/IoT networking technology landscape. 2G networks are gradually taken out of service to be replaced by more efficient 4G technology. At the same time, new enhancements are being added to the LTE standard to better accommodate typical M2M use-cases with large numbers of devices and very low data requirements. In addition, the leading players in the mobile industry have reached a highly significant agreement to define a new global standard for low power wireless communication based on mobile network infrastructure. The new NB-IoT standard was accepted by the 3GPP in December 2015 and will be included in the 3GPP Release 13, due for publication in January 2016. Berg Insight believes that the initiative will become successful in establishing a global standard for lightweight IoT communication on public networks in the next 3–5 years.