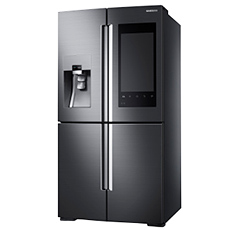 Nuance Communications, Inc. today announced that its voice technologies are powering the new Samsung Family Hub Refrigerator unveiled today at the 2016 Consumer Electronics Show (CES). Samsung’s Family Hub Refrigerator takes home appliances intelligence to the next level with a voice user interface that lets people talk to the refrigerator to access food and recipe content, apps and much more.

The Samsung Family Hub Refrigerator is a sophisticated multi-tasker that organizes groceries and home tasks, connects families, and provides entertainment – transforming the communal kitchen experience for consumers in ways that will redefine how they view and use their refrigerator. Samsung has integrated Nuance’s embedded voice technology that supports “far talking” capabilities to give consumers the ability to launch and engage with the Samsung Family Hub’s apps and services from anywhere in the room. So even when across the kitchen, people can speak to access recipes, create and edit shopping lists, access reminders about groceries and food, and access and create voice memos.

“The rate of innovation in the Internet of Things is creating a world where the everyday appliances we take for granted are becoming smarter and useful in ways we never imagined – as evidenced by the Samsung Family Hub. But as this intelligence evolves, it’s critical to have an interface that allows consumers to seamlessly tap into this intelligence – and that is where the human intuition of voice shines in this increasingly connected world.”