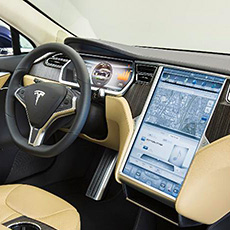 Several categories of car telematics applications are now offered on a commercial basis by most leading carmakers. Examples include eCall and roadside assistance, stolen vehicle tracking (SVT), vehicle diagnostics, connected navigation and infotainment, as well as convenience applications. Convenience applications mainly rely on embedded telematics devices to enable remote control of vehicle functions such as door lock/unlock, vehicle preconditioning (heating or cooling of the passenger compartment before a trip) and finding the last parking position. Several other applications also exist, for instance usage-based insurance, leasing and rental fleet management, as well as electronic toll collection and road charging. However, these applications are usually offered by aftermarket service providers.

The connected car is a major trend in the automotive industry and virtually all of the world’s leading carmakers have launched mass-market services in key regions. The drivers behind adoption of OEM telematics are both commercial and regulatory. Regulatory initiatives related to safety and security will have a decisive effect on the adoption of OEM telematics in Europe. The EU’s eCall initiative and Russia’s ERA-GLONASS set the sight on making an automatic emergency call device a mandatory safety feature in all new cars sold. The proposed CONTRAN 245 mandate in Brazil to install security tracking devices on all new vehicles was however suspended in October 2015 after repeated delays. In North America, commercial services have driven the adoption of OEM telematics services that have evolved from being a differentiator to a mainstream feature now offered by nearly all the leading car brands on a majority of their models.

In Europe, uptake will increase rapidly due to the eCall initiative in the EU and ERA-GLONASS in the Eurasian Customs Union, scheduled to be fully implemented in 2018 and 2017 respectively. 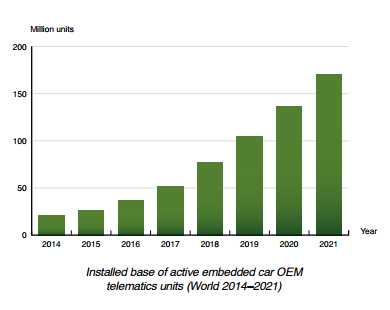 Connected car services have evolved from being a differentiating factor to a common feature with a high attach rate among the premium car brands and are rapidly becoming increasingly common in mid-range vehicles. GM’s OnStar was launched 20 years ago and is today the market leader worldwide with more than 7.0 million paying subscribers and well above 10.0 million active users in total. BMW includes telematics hardware as a standard feature on all its cars sold in 43 markets worldwide and has the second largest user base with 3.4 million equipped vehicles. PSA is in third place and manages 1.8 million connected vehicles in Europe.

“Carmakers and car owners are starting to see the benefits of connected car services as a growing number of new vehicles are equipped with the technology.”

However, the really exciting development will happen when we move from telematics services as an add-on to actually design a vehicle with connectivity in mind. Starting with Tesla, several car makers have introduced vehicles with large dashboard touchscreens and the ability to receive Over-the-Air updates. “We have also seen Volvo and Bentley launch interesting concierge services for the premium segment, such as fuel-delivery to the customer’s vehicle”, added Mr Wennermark.