Mobile Experts has just released a unique breakdown on a “horizontal slice” of the cellular IoT technology market.

In this report, Mobile Experts analyzes the migration pattern of the M2M market to the IoT market. In other words, 2G, 3G, and LTE are migrating to NB-IoT and 5G IoT. This horizontal slice complements the vertical Mobile Experts market studies on smart meters, automotive, asset tracking, and other areas, providing perspective and depth on predictions for upcoming IoT developments.

“The change from M2M to IoT is more than just a name change. New standards are far better optimized for battery-based devices. In addition, the prior history of reusing semiconductor parts for M2M will change—in the future we will see more customized IoT semiconductors.”

Mobile Experts notes in their new report that the shift to the IoT market represents a shift to the Enterprise market, which is large enough now to support specialized products at multiple levels of the supply chain unlike the previous M2M devices which simply took advantage of the existing mobile network. For example, NB-IoT has inspired operators to invest in specialized infrastructure, which means that new semiconductors will come to the market to address the NB-IoT opportunity in a specific way, leading to higher levels of integration in the modem/transceiver.

“The changes represent a break in our approach to connected devices. We are beginning to set new standards that will support the rise of new applications. This report includes analysis of growth from 2014-2021 in the transition from M2M to C-IoT, and from these predictions we anticipate device shipments will grow from about 120 million in 2016 to more than 450 million devices in 2021,” remarked Principal Analyst Joe Madden. 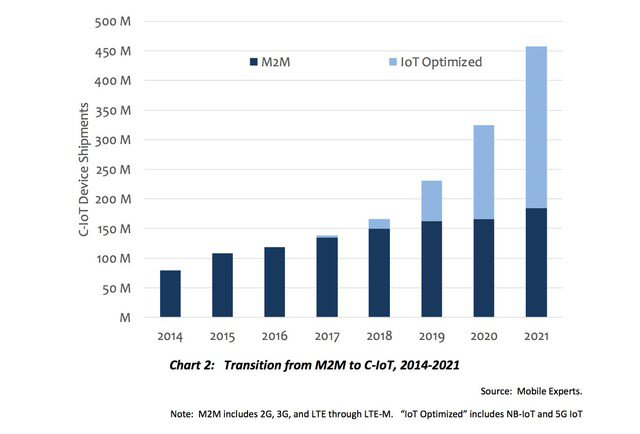 According to Mobile Experts, hardware revenue at the module level and semiconductor level will not grow as quickly as the device numbers imply. Because of the transition from expensive LTE modems to cheaper LTE-M and NB-IoT devices, dollar content for connectivity will drop over time, resulting in very different growth profiles for shipments and for revenue. Over the long term, Mobile Experts predicts strong revenue growth as well, but this study highlights some areas where business models will be challenged over the next three years.