A new report from the IoT market research firm Berg Insight says that the global number of cellular IoT subscribers increased by 40 percent during 2019 to reach 1.56 billion.

Growth was driven by strong uptake across the main markets for IoT solutions comprising China, North America and Western Europe. Due to the global COVID-19 pandemic, the growth in IoT connections is anticipated to be halved in 2020 compared to the previous year.

By 2024, Berg Insight now projects that there will be 4.15 billion IoT devices connected to cellular networks worldwide.

“Vodafone and AT&T are consolidating their positions as regional market leaders in Europe and North America respectively, serving multinational clients on a global basis”, says Fredrik Stalbrand, Senior Analyst at Berg Insight. The two operators hold a strong position in the automotive OEM segment and are longstanding partners in the space, working together to provide a consistent service for joint customers.

In terms of revenues, IoT connectivity services still account for around 1 percent of total revenues for most operator groups. Berg Insight’s analysis of the IoT business KPIs released by mobile operators in different parts of the world suggests that global IoT connectivity revenues increased by around 17 percent during 2019, while the monthly APRU dropped by 23 percent. 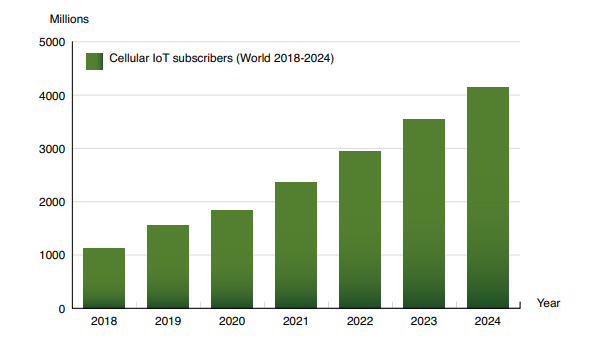 “Mobile operators looking to increase IoT revenues increasingly focus on adding cloud services and security capabilities on top of their connectivity offering to capture a larger share of the market.”

Tags:Berg Insight
Previous : BT Accelerates the Next Phase of UK’s First Live 5G Private Network for Industry 4.0 and Smart Manufacturing
Next : How businesses can implement IoT to restart during COVID-19