What is an IoT platform?

This latest research publication details the IoT platform company competitive landscape, classifies the technological capabilities of each IoT platform, identifies the main segments each platform targets, and ranks the leading platforms based on revenue and market share.

Some of the key findings from the competitive landscape report include:

1. The number of IoT platforms is no longer growing. 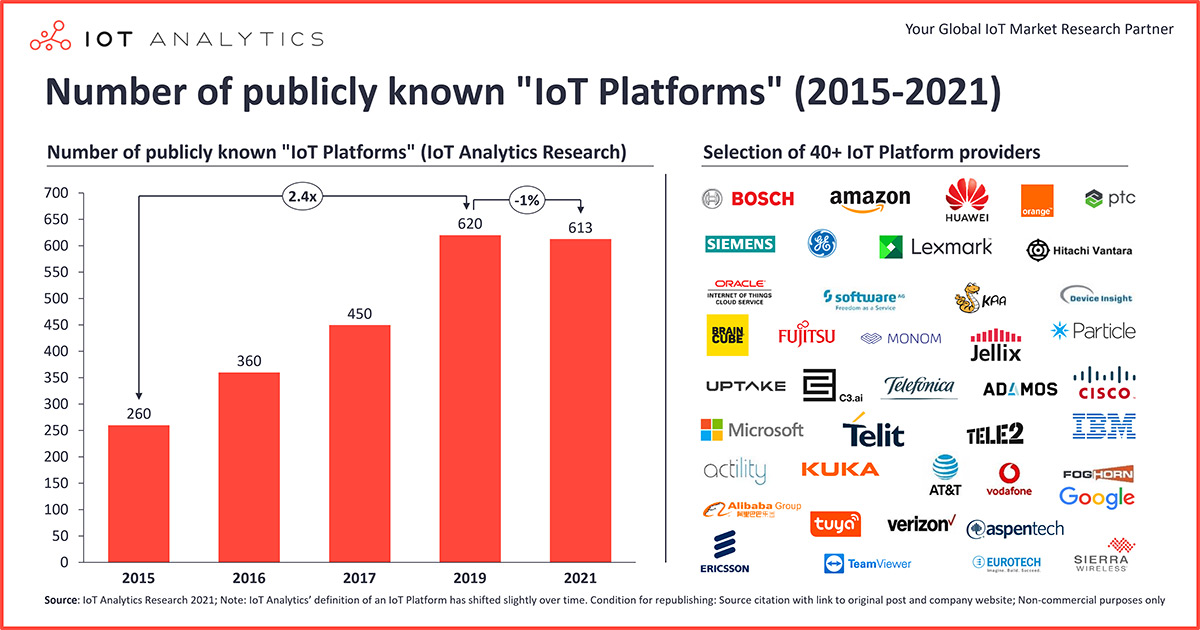 The number of IoT platforms might have stopped growing, but the size of the market has still increased substantially. In 2020, $5 billion were spent on IoT platforms. The market is expected to grow to $28 billion in 2026. That constitutes a 33% compound annual growth rate (CAGR) for 2020 to 2026. The growth is fueled by the rapid adoption of cloud-based IoT platforms and the increasing number of customers choosing to buy (not make) IoT platforms.

For a detailed look at the typical components of IoT platforms, check out our recent analysis.

2. In the past two years, 188 IoT platform companies have discontinued operations.

However, 188 of those companies are not considered IoT platform companies anymore:

In addition, 182 new IoT Platform companies have emerged since 2019. The fact that 30% of all market players discontinued and almost the same percentage joined the market demonstrates that the market environment remains highly dynamic.

3. Many platform companies have pivoted their business models.

In the last two years, 30 platform companies have pivoted to an application or now offer a vertical solution instead of a horizontal IoT platform, and 10 now offer a security platform. Rather than choosing to compete with 620 other companies and invest millions of dollars into maintaining a highly modular and scalable software platform, those providers followed the demand for specific—sometimes niche—applications that allow them to build out competitive advantages in vertical-specific solutions.

This trend of pivoting toward solutions is more significant than the numbers suggest. Most current IoT platform companies are now offering vertical solutions alongside their platform offering.

4. The market is concentrating further around a few providers. 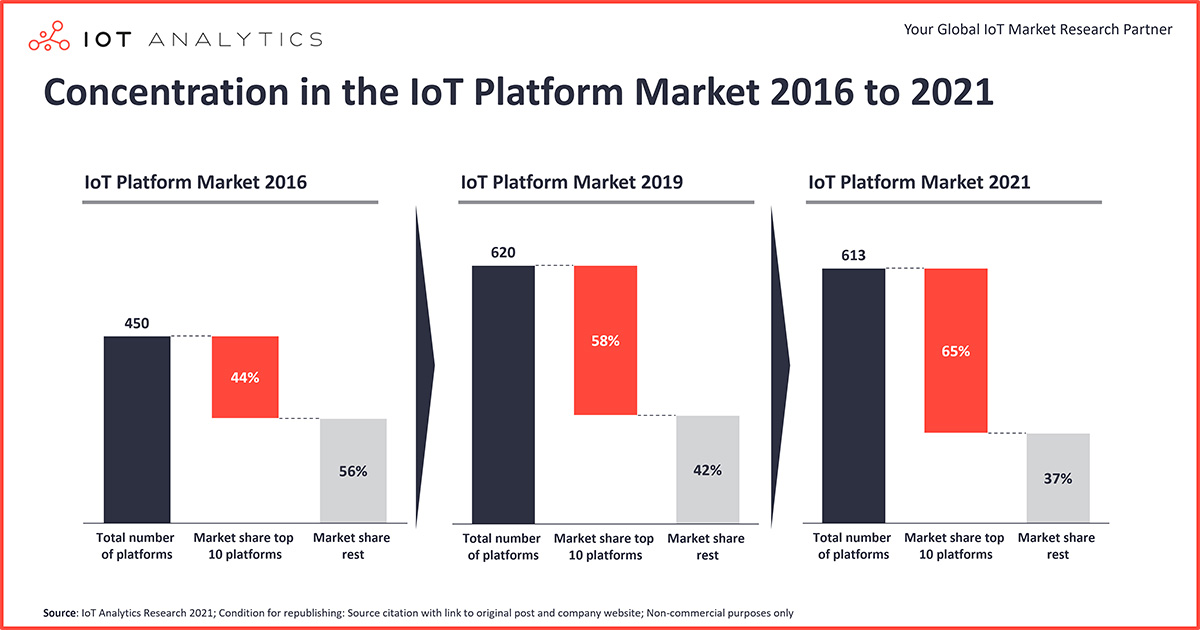 The market for IoT platforms continues to concentrate, with the top 10 companies now controlling almost two-thirds (65%) of the entire market, compared to 58% in 2019 and 44% in 2016. The hyperscalers (Microsoft, AWS, and, to a lesser degree, Google Cloud, Alibaba, and some others) have become market leaders, and they continue to outgrow the overall market with growth rates of 50%+ per year.

Both AWS and Microsoft continue to add new capabilities to their growing portfolios of IoT platform services. Earlier this year, AWS introduced AWS SiteWise Edge to a wider audience, which allows customers to keep their industrial data on-premises, e.g., for lower latency or security reasons. Microsoft recently presented new capabilities of its IoT solutions for retailers utilizing cameras and sensors to enable smart spaces. Additionally, the company showcased its own use of Azure Digital Twins for building management. Microsoft aims to standardize a shared data model for Digital Twins (e.g., in the building space) as part of its cloud services.

5. The number of IoT platforms in APAC and China is rising. 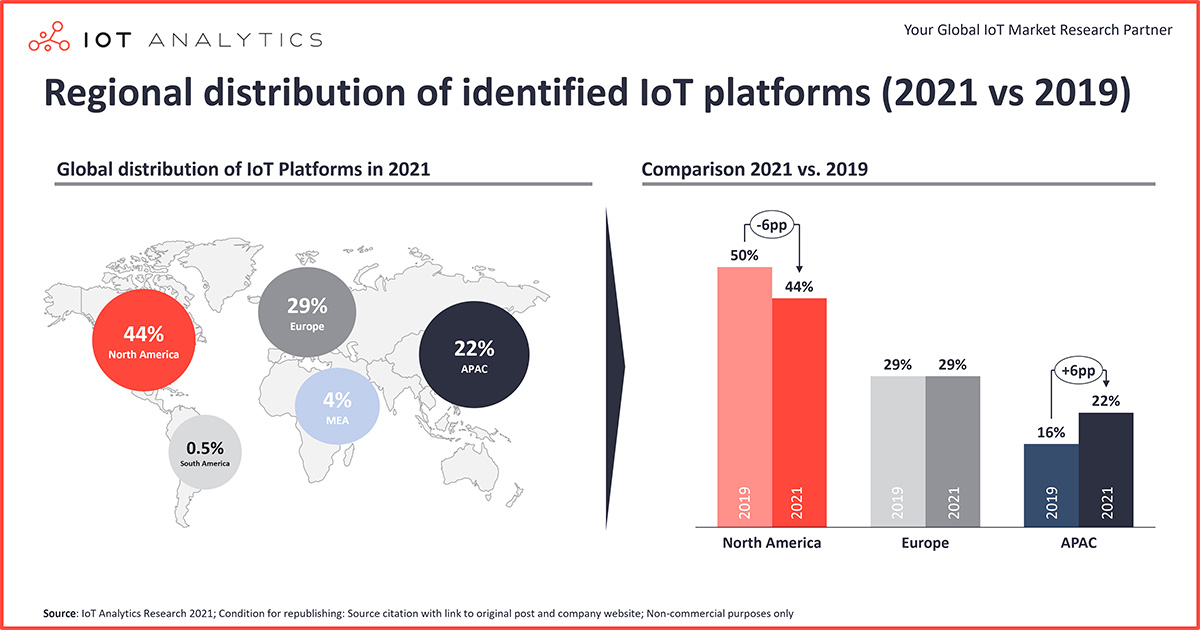 In June 2021, the Chinese government announced its goal of 3–5 industrial IoT (IIoT) platforms with international influence “made in China” by 2023. This agenda is being reflected in our research: the number of vendors from APAC (and especially China) has increased from 16% in 2019 to 22% in 2021. Shenzhen and Beijing are now among the top five cities for IoT platform company headquarters. While most IoT platform companies are still headquartered in North America (44%), their share has decreased by six percentage points in the last two years. Examples of the 66 Chinese IoT platform companies identified include tuya, Alibaba Cloud, Baidu IoT Core, and the Huawei Connection Management Platform.