The global wireless M2M market was strong in 2011, displaying growth in all major world regions and vertical segments.

The most significant market development in 2011 was a major breakthrough for cellular M2M communication in Asia-Pacific. The number of M2M subscribers in the region increased by 64 percent to reach approximately 34.5 million at the year-end, fuelled by massive growth in China that almost doubled its cellular M2M subscriber base to approximately 21 million. North America and Europe recorded annual growth rates of around 26 percent each. At the end of 2011, the number of M2M subscribers in the EU and the US was around 30 million and 27 million respectively. Other world regions accounted for around 20 percent of the global cellular M2M subscriber base in 2011. Latin America had
an estimated 6.6 million M2M subscribers, with Brazil being the most advanced country. South Asia and Southeast Asia were in a very early phase of adoption with few M2M subscribers in major countries such as India and Indonesia. The Middle East & Africa market was dominated by South Africa and Turkey, which had in excess of 1 million M2M subscribers each.

A sweeping change has transformed the wireless modules industry in the past years. The familiar brand names Siemens, Wavecom, Motorola and Enfora have disappeared and new players such as Sierra Wireless and Gemalto are now in charge of developments. Chinese vendors have taken over the domestic market and some of them are starting on international expansion. Despite a consolidation among Western vendors, average selling prices for wireless modules continue to decline and as a result industry revenues have been declining in the past years.
Well executed transformational strategies will be the key to success for wireless module vendors in the years to come. Extended value propositions, product innovation and more mergers and acquisitions are some of the things to expect. Meanwhile software and system solutions has emerged as the fastest growing segment in the M2M industry. Increasingly advanced large-scale M2M applications require advanced service enablement platforms that integrate remote devices, mobile networks and enterprise applications. A wide range of players are attracted by the market opportunities in the space, most of them having backgrounds in embedded solutions, telecom OSS/BSS systems or enterprise application
platforms. 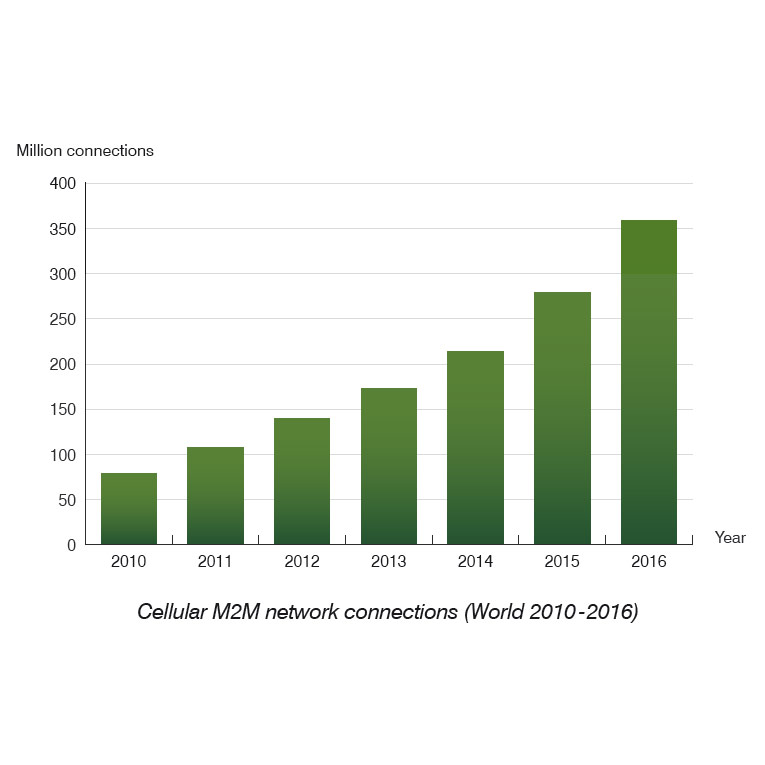 Mobile operators all over the world have announced initiatives for driving growth in the wireless M2M market over the past years. The first results are now visible through rapidly increasing numbers of M2M subscribers and higher revenues. Berg Insight estimates that the world’s ten largest telecom operators by revenues had 68.2 million M2M subscribers at the end of 2011, an increase of around 38 percent year-on-year. Around 3.4 percent of their aggregated base of 2.0 billion mobile subscribers was M2M devices. China Mobile is believed to have emerged as the world’s largest provider of M2M connectivity during 2011, with an estimated 14 million subscribers at the year-end. AT&T established a clear leadership in the US with 13.1 million M2M subscribers, up 40 percent yearon-year. Meanwhile Verizon Wireless’ M2M subscriber base increased modestly to around 8.6 million. Vodafone held the number three spot with approximately 9 million M2M connections, ahead of T-Mobile and Telefónica, which ended the year with around 6–8 million M2M connections
each. China Telecom entered the top ten with around 4.5 million M2M subscribers, racing ahead of Telenor, Sprint and Orange at 2.5–3.5 million connections each.

Notes: 1) Excluding some M2M devices in regional subsidiaries. 2) DT only reports M2M subscriber data for its US subsidiary

About Berg Insight
Berg Insight offers premier business intelligence to the telecom industry. We produce concise reports providing key facts and strategic insights about pivotal developments in our focus areas. Our vision is to be the most valuable source of intelligence for our customers.