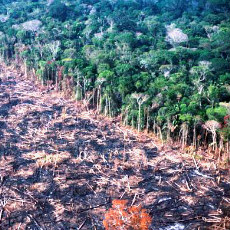 The Tembe tribe, the indigenous people of Brazil, teams up with a tech start up company, Rainforest Connection to protect its rainforest from illegal logging activities, through a simple M2M device designed from old smartphones as deforestation threatens not only the Amazon. In fact it has become the second largest contributor to climate change because it produces more greenhouse gas than all the trucks, cars, airplanes and ships combined. Environmentalists believe that the best way to stop climate change is to stop illegal logging of trees, especially in highly deforested areas and endangered rainforests.

The tribe lives along the Maranhao and Gurupi Rivers in the state of Amazonas and Para, have strongly stood against these illegal activities. As they have recently recovered their rights to 600 thousand hectares of land, they had become more involved in protecting the area. However, protecting the lands has not been an easy task for the tribe even with the Brazilian government’s help to stop illegal logging. According to Greenpeace who did a two year investigation, the problem is still out of control stating that 78% of the countries timber logging are done illegally. This has put the indigenous people’s lands under a big threat and has driven climate change by changing biodiversity and destroying a valuable carbon sink.

In an effort to prevent the further proliferation of illegal logging and rainforest deforestation, Rainforest Connection, a San Francisco based tech start up company, took the challenge and designed an M2M device to help officials and rainforest protection organizations as well as the government to address this concern. The solution involves the transformation of old smartphones into retrofitted solar-powered listening devices that pick up forest frequencies such as chainsaws trucks in the area, with the use of highly sensitive microphones. The open-source software installed will analyze the sound frequency gathered and sends alerts to forest rangers when chainsaw noises are detected, enabling them to check for any illegal logging activities real time and crack down operations. This simple low-cost M2M communication device uses wireless communication services and sends information to the cloud API. And from the cloud API, alerts are sent to nearby on-ground agents and remote users involved in this initiative, whose reactions are highly encouraged.

“The technology being developed by Rainforest Connection is an extremely powerful tool for the protection of rainforests, especially in our case, when combined with the on-the-ground presence and determination of local indigenous groups serving as guardians of their traditional lands which occupy over a quarter of the entire Amazon region,” said Vasco M. van Roosmalen from Equipe de Conservação da Amazônia training programme.

The advantage of deploying this M2M device as opposed to traditional satellite monitoring systems is that it conveys real time information straight to those who are able to respond immediately, offering the best chance to stop illegal loggers and catch them while on the act. Encouraging first responders and remote responders also creates a global community of environment-concerned individuals and promotes social responsibility not just among the locals but the whole world.

Parlacom Brasil, one of the leading providers of M2M communication and solutions in Brazil, believes that this is a great opportunity to protect the resources of the country through technology and M2M communication devices. Headed by its Founder and CEO, Clovis Lacerda, Parlacom expresses its willingness to participate in such initiatives in the future.
Lacerda said in a statement:

“M2M has a significant role in the connected world. Part of that is how these devices can reduce the amount of energy needed, thereby reducing greenhouse gases that contributes to climate change.”